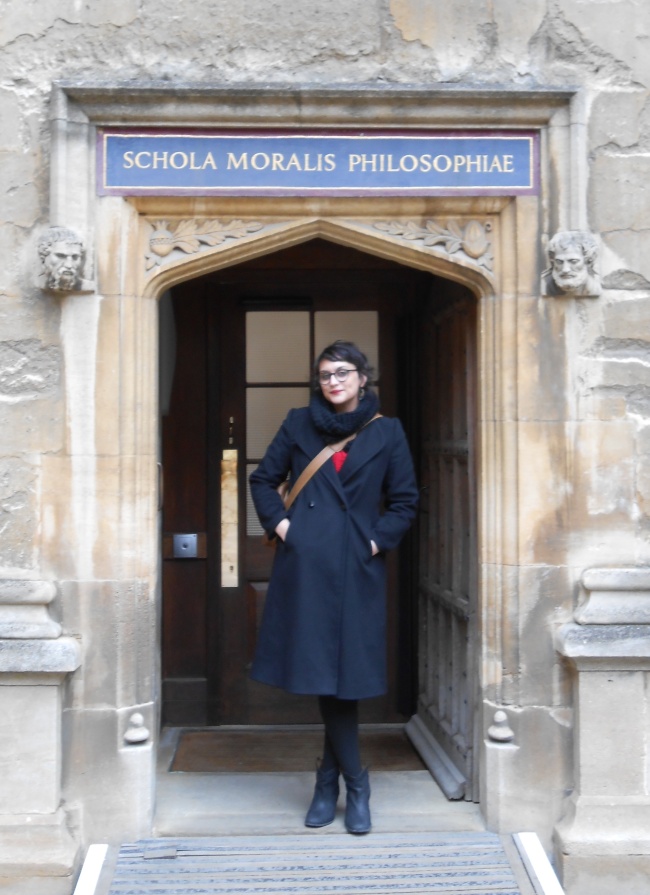 From March 22-28, I participated in an intimate workshop on human rights in and after conflict at Merton College, Oxford. Participants included other philosophers, undergraduates from diverse studies, students in the graduate peace and conflict resolution program at University of Oregon, former US military combatants, and actual humanitarian workers who have helped negotiate cease fires and went to war lords to ask them to stop their troops from raping local women. I will shortly be posting my thoughts on what I learned and how I want to integrate it into my work. For now, I am posting this picture of me at the Bodeleian Library.

Pronouns: She/Her/Hers or They/Their/Theirs I am an Assistant Professor of Philosophy at University of Washington, Seattle, and I work on philosophy of law, social/political philosophy, and feminism. My current research project argues that the criminal justice system in the United States oppresses people through policing, courts and punishments, and collateral consequences of convictions and arrests. Because this system is an oppressive one, I argue that those engaged in anti-rape and anti-domestic violence activism should not avail themselves of the criminal justice system to achieve their goals. Looking for other ways of fighting rape and domestic violence will actually serve victims and their communities better. In addition to obtaining my Ph.D. from Boston College in 2020, I also graduated from Boston College Law School in 2017 as a part of a dual degree program in philosophy and law at Boston College. I was admitted to the Massachusetts bar in January 2018.
View all posts by Amelia M. Wirts, Esq. →
This entry was posted in Uncategorized. Bookmark the permalink.